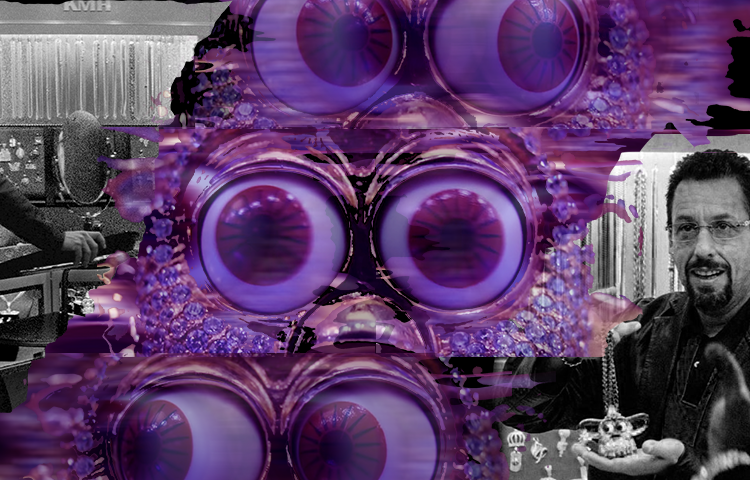 After winning best soundtrack at Cannes Film Festival in 2017 for Good Time, artist Oneohtrix Point Never returns to the streets of New York to collaborate once again with the incredibly talented brother director duo Josh and Benny Safdie in this hyper anxious, psychedelia fueled journey of Adam Sandler’s Howard Ratner.

The film centers around a black opal, something that entices Howard — as well as co-star Kevin Garnett — because of its cosmic quality, something they feel a connection to beyond our known world. In the title sequence, we see this celestial item morph through a thousand year journey from space right into Howie colon. In some ways, it actually represents the rest of the movie. Large and overscored, Daniel Lopatin (Oneohtrix Point Never) takes us through antihero Howard’s ugly and messy journey through the polished and upscale diamond district with such confidence and tenacity that you don’t realize all nails have been bitten right off until the synths fade out.

At some times, the score offers to elevate the restlessness of the scene by offering choke inducing rhythmic percussion layered with an eight piece choir reminiscent of Buddhist chants. In other times, he will replace the percussion with a saxophone and contradict the scene, with actors telling you to feel worried, while the score is meant to soothe the senses. This is where Lopatin shines. This juxtaposition makes the toes curl and feels transcendent in its nature, where the Safdies and Lopatin truly make you hear like the diamond district is an extraterrestrial time outside of our Earth.

When someone (or everyone) is yelling, the synths might go soft, when Howie is about to have sex, they might pop like fireworks, and when he is with his family, there is none. This adds another nature to the film. When Howie is with his family, attempting to bubble in the chaos, it is calm. Nothing. As if the energy he receives from gambling is, to it bluntly, more important and thrilling. This is also what separates it from their 2017 masterpiece, Good Time. Feeling much more high octane in its constant energy, Lopatin repeats what is on screen with his sounds. This is no criticism, but rather, just different. Its futuristic, reminiscent of John Carpenter-esque soundscapes, a pulsating prog punk sound teetering on imbalance as if one wrong move could cause the tower of tension to topple.

In Gems, Lopatin acquires more pieces, building and expanding the world of Howard. It is much more meditative and reflective, and works with this elevation and juxtaposition. Synths that glitter like a chandelier blocks perfectly together with a light airy flute, and creates this perfect conjunction when Howard can finally take a deep after the anarchy of the day, because “the bet hit.” A sound that is quite the opposite, titled “F**k you Howard,” makes the synths feel like they are the soprano, while the choir is taking the rest of the parts and create this absolutely beautiful piece that is specific to Lopatin and the film. What makes it the opposite of before is it comes not during a big argument between Howard and co-star Julia Fox’s character, but afterwards when Julia is walking away. It is a moment of heartbreak and anger for her, and rather drawing out a few long notes to create this somber sound, Lopatin elevates it and make it a moment of empowerment and triumph, as if she is the one in control now.

This movie is easily one of the best of the year, and Lopatin’s score only elevates it. The greatest of it comes from its absurdity. It is hard to put into words what you will feel when listening to the soundtrack — it is truly is a sound of its own. Tribal chants echoing from around your ears, high BPM, and spacey synths should not work in the way they do here, but Lopatin is able to connect and create a whole that is distinctly his own. Go see this movie immediately if you want to support independent cinema and music!