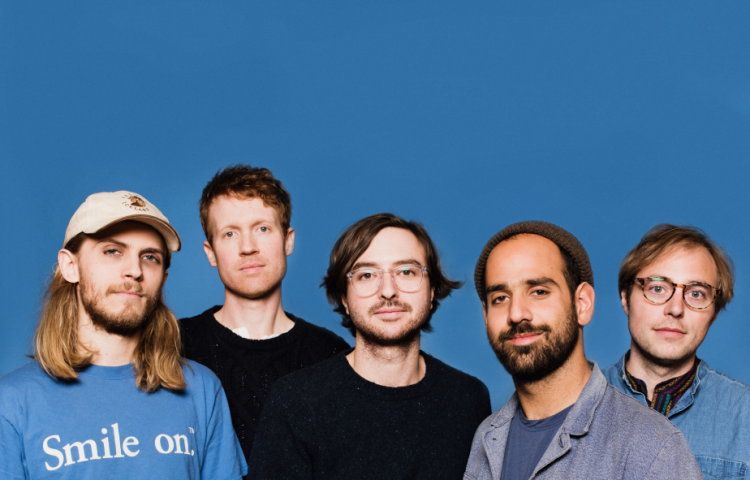 After over a year of silence regarding a new release from the band, it is exciting to hear new tracks in the mix, even if you can only hear them in concert.

Since that special night in Providence, dedicated Real Estate fans on their subreddit, r/realestatetheband, have documented five performances of other new tracks not recognizable by the trained Indie rock concert goer ear.

Although these songs have been performed repeatedly in concert, to the surprise of many fans, the band — consisting of Martin Courtney, Alex Bleeker, Matt Kallman, Jackson Pollis and their newest member, Julian Lynch — have not officially released any of these jams as singles on any physical or digital format.

However, if one wanted to listen to the various live performances, they are scattered over YouTube, such as the recording below.

Strange that, again, it’s been almost a damn year since they debuted a new song and it is yet to be officially released. I mean, for their previous album, In Mind, “Darling” and “Stained Glass” were both promoted months before the initial album release. So, if an album is in the works and new material has been performed in concert, is the only place I can hear them at live shows?

Now, I am anticipating a summer release. The new album must be a summer release. New Real Estate while I lounge in a folding chair next to a body of water and bask in cosmic melodies as dreamy, saturated guitar picking that I am foreseeing for the new album is what will define my weekends this summer break.

According the the band’s Instagram @realestateband an LP five IS on the way but when? It’s been over two years since their fourth studio album In Mind was released way back in 2017. (Remember that one? Not their best work, but it had some shimmering moments and with that Real Estate twang I find myself drooling over). Their social media has teased at the concept of releasing an album in 2019 on multiple occasions. From an initial Instagram post on January 3rd, 2019 with a straightforward caption of, “Album V : coming soon” to another post just three weeks later of three studio musicians recording on violin, viola and cello. Possible a more orchestral sound to the upcoming album?

In an age where delivering music to fans is as easy as uploading to iTunes, Bandcamp, YouTube and/or Spotify with a single click, maybe it is relieving we, the fans, aren’t satiated with singles before the initial new albums release. Especially since acquiring the song digitally is a piece of cake, and even acquiring a 7” is a click (or two) away.

This being said, I have fantasized over Real Estate dropping the album overnight in its entirety. Having a day where a complete, unknown, unlistened new LP is entering my ears will be a superb day. Recently, it seems bands and artists have been releasing too many singles prior to the initial album release. At least, I think sharing near half of your project, piece by piece, before the whole album is shared takes away from the total excitement.

For example, Australia’s seven piece Psych-Rock band (generally speaking), King Gizzard and the Lizard Wizard most recent release, Fishing for FIshes had five of the nine song pre-released as singles. Not to say it ruined the album for me, but, a majority of the album I was already familiar with and honestly I haven’t found myself diving into the album much these past few weeks. This isn’t because I don’t enjoy the album, but it was presented to me slice-by-slice through Spotify and YouTube rather than in one finished, neatly wrapped package with a bow and a delicious chocolate cake inside. Some fans don’t listen to singles, and maybe they are just the superior music devotee. Maybe Real Estate is going to let loose the album as a whole right around the corner… or just feed us a slice of their cake.

Back in early February I was fortunate enough to catch Real Estate perform on the final night of their Three Night Residency at The Chapel in San Francisco. It was a chilly, rainy night in the city but the warmth of the crowd and venue itself changed my mood and dried my denim jacket near instantly. They played four new songs alongside a lot of classics which was made the concert experience very pleasurable for me. It was the last show of their North American tour and they had a relaxed, outgoing attitude while on stage and when they performed. Two year old newcomer Julian Lynch,lead guitar, executed the licks beautifully and did not deviate from the groundwork laid out by Matt Mondanile, a name rarely talked about or played anymore at KCPR. Overall the concert was a success and had a strong showing by all musicians.

That is why I am ecstatic to share that Real Estate is coming to SLO Brew Rock on June 6th. San Luis Obispo has been flooded with quality artists so far this school year. Having Real Estate wrap up the school year on their trip up the coast is a real treat. It can be difficult to see them in concert sometimes, for they don’t tour often due to the two little ones Martin has at home. One can expect that they will deliver that handful of new tracks never before heard, seen, or felt on an album, a solid opening performance by Kacey Johansing and our favorite, jangle-pop, indie anthems we find ourselves listening to when we either road trip with friends or sip coffee to in the morning. Gotta love that jangle and twang. See you there June 6th!

PSA: Writing an article about “Real Estate” is tricky when your Google searches pop up with San Luis Obispo, CA Real Estate and 17 real-estate agents.

Evan Reed is an Environment Earth and Soil Science Junior and a KCPR DJ, taking the airwaves as DJ Nomad. He wrote the article. Image credit to Real Estate.