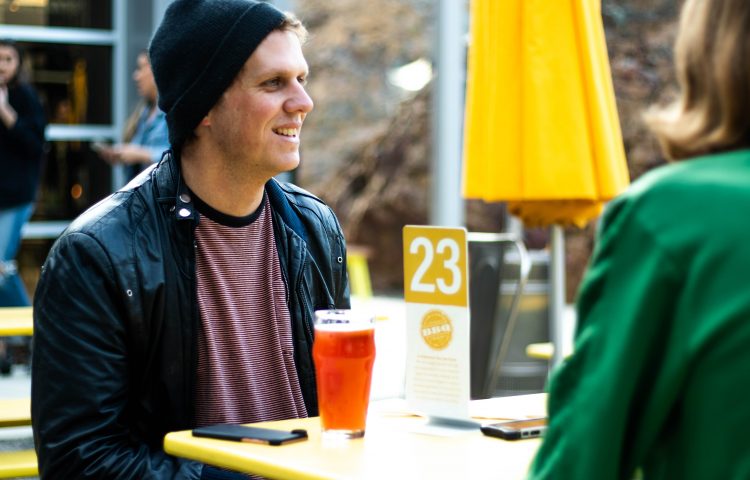 Before the show, vocalist Brad Petering met up with DJ Spenser J to share his views on the band’s quick rise to popularity.

Here are some interview highlights:

Q: So, TV Girl started up in 2010, could you describe how you all came together as a group?

A: Well, originally it was different than the people who are in the band now. When I started, it was me and my friend Trung and we’d been in bands for a long time together in San Diego. We had a band before this called the Movers and the Shakers and a bunch of other bands that didn’t ever go anywhere. They weren’t popular and no one really heard them.

This was when blog bands were blowing up and we had these friends, Cults, and they blew up in San Diego. We knew they blew up because all these blogs started posting about them, so we were like, we should just start a band that sounds like the music these blogs are posting about, you know like Neon Indian and Washed Out. So, then we just emailed like 50 blogs. Literally, the next week, we were “Best New Music” on Pitchfork. We weren’t even really a band, hardly. We hadn’t even played a show, have a record or anything, so it was kinda crazy. We probably got too much attention right away, but that happened to a lot of bands back then, you know. It was kind of a crazy time.

Q: Did that early blog scene get you interested in using sampling for your music?

A: No, I was sort of making hip hop beats and stuff. A couple years before, I thought I was going to make beats for rappers, that’s what I was trying to do. But, then we just combined the band we had before, which was kind of Beatles-esque guitar music, with hip-hop. Stuff like that was sort of the foundation of our project at first.

Q: What are some of your favorite samples you’ve used for your songs?

A: You know, I don’t know. It’s just really good to find some old sample that no one’s used before. Because you can’t really take from even like obscure funk records. The most obscure funk record you find is probably going to be found by someone else first and used, so you have to really go deep into some old obscure radio show that has instrumental music or something like that.

Yea, there’s a really beautiful — I think I might make a song out of it — s,omething out of the 1950’s that’s some radio mystery that has the most beautiful orchestral sequences that are super melodic. I’ll probably use that because I won’t get sued and I know for a fact no one’s ever used it for hip-hop or anything like that.

Q: After you blew up from the blogs, did you all start touring?

A: Yea, we immediately tried to get together a band right after that because we were getting hit up by industry people which was strange. We didn’t really know what to do. As I said, we weren’t even really a band yet so we couldn’t just go and tour with whatever crazy band they said we would be able to open for.

I think our first tour was like a year after which was like kind of funny. No one hardly came to that first tour. Some people did, but it felt like we got more attention back then. Yet it didn’t really translate to people coming out to shows. Whereas now, no one writes about us, but this whole tour was sold out. I don’t really know how that happened, but it’s pretty cool.

Q: Are there any towns or cities you look forward to going to on tour?

A: Not really, towns are pretty much the same. There’s like four cities in the U.S. that feel really different from the rest. I think Miami feels the most different. They don’t have indie rock clubs down there. If you play a show there, you have to play at a dance club which is kind of interesting.

Then there’s like New York, Southern California has its own vibe, and New Orleans  are all different. Other than that, every big city has its one hip street with the hip bar that the bands come through. I don’t know, it all kind of blurs together.

Q: Are you currently writing any new material?

A: I’ve been writing here and then. I was trying to take a break from it all for awhile. I moved to New York and I was going to write a book but I got too distracted. It’s pretty hard to write a book, so I found myself procrastinating by making music. I mean if that’s a way to procrastinate, it was pretty productive so it wasn’t that bad.

Q: What are your plans after this tour?

A: Well we have another tour in about two months and I think I might try to go somewhere isolated to try and finish that book I wanted to write in New York. I might try that, not sure if I will, but it’s a dream.