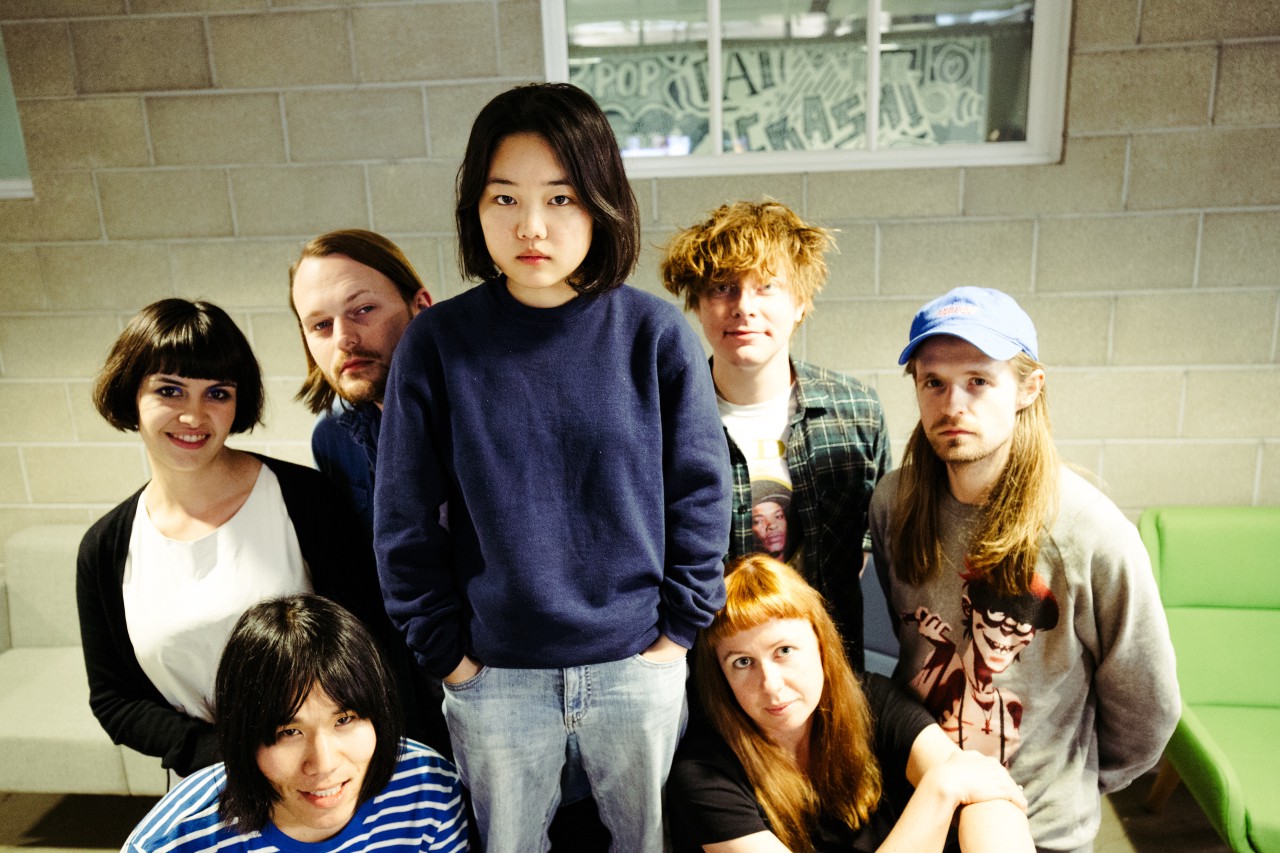 If any band sounds like the feeling of drinking a cold, fizzy soda pop on a sunny spring day, it’s probably Superorganism.

The eight-piece indie group is saccharine sweet, from their outfits, to their songs, to their music videos or even their impossible-sounding origin story.

Here’s the story: a Japanese teenager living in Maine is making soft-spoken covers of indie idols on SoundCloud. While in Japan, she happens to run into New Zealand based indie-pop band, the Eversons. They, and future members Ruby, B, and a South Korean man named Soul make music and communicate exclusively via the Internet. That is, until their song “Something for your M.I.N.D.” blows up, and they move into a “tiny terrace house” in London.

If you think that origin sounds straight from a comic book, you’d almost be right. Almost, but not quite, because that is the story of the inception of Superorganism.

There is something about the band that is hard to define — a je ne sais quoi, if you will. The members are unassuming and their music is unabashedly childish. Their official webpage is a modern recreation of a 1990’s Geocities website — with a psychedelic twist, of course. Their music videos have a similar charm; they might seem rudimentary, but they are, in fact, extremely calculated videos crafted to evoke some sort of nostalgia.

The song “Everybody Wants to Be Famous” — including the video — speaks to the essence of the band. There is a kind simplicity to it; it has a traditional verse-chorus structure and the lyrics and imagery are puerile and almost meaningless.

But, Superorganism’s brand is more like maximalism. There is a certain beauty to throwing everything at the wall and seeing what sticks. With eight people collaborating on every song, it should not be a surprise.

Seriously, just watch their NPR Tiny Desk performance. All of the countless sound effects in their songs are done practically. The whole thing is like watching a foley artist step-dad performing for children that aren’t his, desperately trying to impress them by putting on a show full of things he thinks they might like. They blow air bubbles through a straw, swish water in a bucket, make percussion by banging on a toy chest, swing wind chimes, and take bites from apples, just to name a few. Orono, the lead singer, reads an excerpt from an old book in during one of the verses of “Prawn Song,” and ends the set by taking a sip of neon-orange soda from a two-liter bottle. The whole thing is so cute that it hurts.

The band has been compared to the likes of the Gorillaz and Kero Kero Bonito for their ability to crank out absurdly — and absurd — catchy pop hits. But, there is another similarity beyond the music: mystery. The band likes to have fun with their audience by leaning into and participating in fan theories (they did get their start via the Internet, afterall). One of the most popular theories is that frontwoman Orono is, in fact, not a Japanese teenager from Maine, but a hologram. It is difficult to look in any forum or comment section about Superorganism without finding chants proclaiming “Orono is a hologram!”

Maybe it’s true, who knows? It’s probably not, but that is exactly the charm of Superorganism.

They beg you to let your guard down and embrace that childlike imagination and disregard the obvious for whatever makes a better story — or better music.

Anyhow, if you wish to take a sweet sip from the carbonated, sugary beverage that is Superorganism, feel free to check out the Fremont Theater’s website, where tickets are on sale for their show tonight. If it will be anything, it will be fun. I pinky-promise.

Jakob McQuade is KCPR’s Editor-in-Chief and a Cal Poly journalism junior. He wrote the article. Image credit to Next Big Sound.