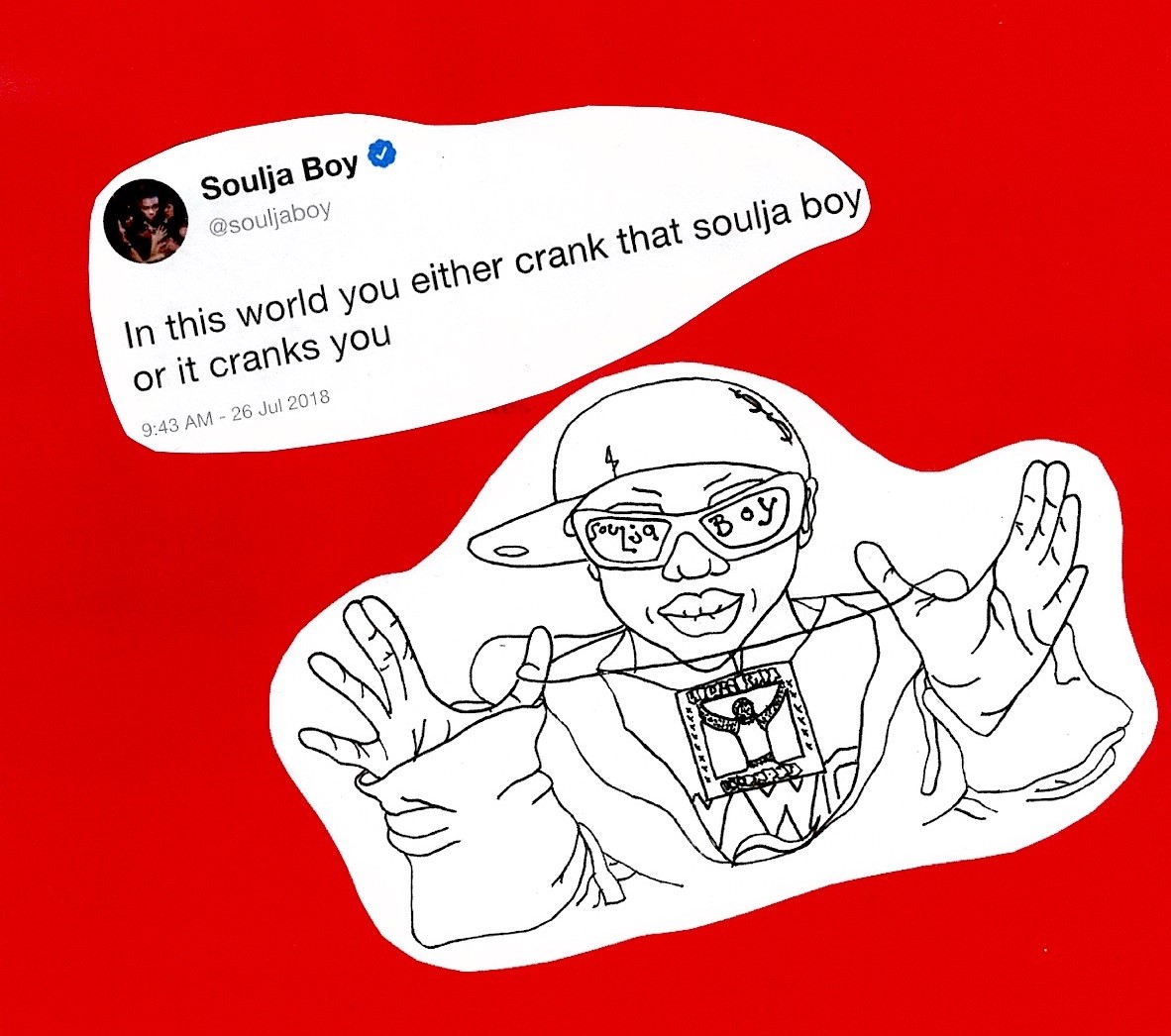 Soulja Boy’s recent antics in interviews such as The Breakfast Club has some people calling the “Crank That” rapper comically delusional.

But, today’s internet rappers know that Soulja’s influence is nothing to joke about.

Perhaps this lack of recognition comes at a time where it feels like every viral rap song has a dance attached to it, where the internet is the universal medium for distributing music, and where rappers are going from recording in their closets to getting DMed by Drake (Draaaake?!) overnight — but that’s the point.

Before Soulja, these trends were not commonplace in the rap game.

Or maybe it’s because we are too far removed from the days of the indestructible Nokia phones that could withstand any drop — even one as hard as the beat on “Crank That” — which alerted middle schoolers everywhere that they were getting a call.

Nonetheless, Soulja Boy was the martyr that allowed many of today’s rappers to find a career. Sure, his simplistic beats were self-produced with FL Studios, his flows were average at best, and his lyrics often revolved around immature topics such as bad grades and getting texts on a Sidekick, but this isn’t why Soulja Boy is influential. Soulja Boy was an internet marketing genius and created innovative ways for DIY rappers to break into the mainstream.

Soulja Boy’s real strength was in his marketing — he was an internet marketing genius.

In the early 2000’s, unless you had label money, a team of professional audio engineers, and cosigns from established industry rappers, you had little to no chance of making it. But Soulja Boy used the internet to his advantage in a way that revolutionized how rappers can access their audience.

One of the several ways that Soulja Boy created this model was through a website called SoundClick. For reference, SoundClick was essentially the precursor to SoundCloud. While the term “SoundCloud Rapper” may be thrown around as a demeaning insult today, Soulja embraced the identity of a SoundClick rapper.

Perhaps one of the most creative ways that Soulja Boy used SoundClick was by uploading his song “Crank That” under the title “In Da Club by 50 Cent.” In an interview with VladTV, Soulja said that when people downloaded the song, they were captivated by the initial “YOUUU.”

SoundClick allowed Soulja (who came from a hometown of just over 7,000 people) to reach an audience of millions. And he must’ve had a gift for creating catchy, braggadocios anthems because one of the first song he uploaded to the site, “Doo Doo Head,” became a number one hit.

But being a one hit wonder on SoundClick wasn’t enough for Soulja Boy. He knew that to have a sustainable career in the rap game, he would need to take advantage of every social media outlet that was available. This incentivized him to spread to media platforms that were just months old, such as YouTube and MySpace. It was on these sites that he cultivated a fan base where fans felt they had direct access to the rapper’s daily thoughts, as opposed to feeling like spectating peasants with only tantalizing glimpses of an artist’s life.

While Soulja Boy may not have had the money for billboard and TV ads, he turned his loyal fan base into his own team of advertisements. The popularity of his most streamed hit, “Crank That,” went hand in hand with the popularity of the Crank That dance. On his YouTube channel, he taught an audience of millions the goofy dance that accompanied this legendary song. Pretty soon, every middle school boy was avoiding the awkwardness of talking to girls at gym dances by busting out their perfected Superman jumps. Not only did this make the song an instant hit, but it encouraged the replayability of the song while simultaneously ensuring that everyone was bound to know about it.

This set a precedent for the “Keke, do you love me?”’s and “teach me how to dougie”’s that rock our world today. Soulja Boy proved that a song with a specified dance would exponentially increase it’s virality while turning dancing fans into personal endorsements for that song. But why does any of this matter if you aren’t making money off it?

Soulja had the same question, and he answered it with the current blueprint for stream monetization that countless artists follow today. At the time, SoundClick had no form of monetization available for popular artists. But Soulja made a deal with the company that downloads of his songs would cost one dollar, of which he got 50 percent. At a time predating iTunes, this was fundamental for the sustainability of Soulja’s rap career.

Soulja’s lucrative influence didn’t stop here though, for he became one of the most notable pioneers for implementing songs as a ringtone. Through an app called SayNow, millions of fans were able to download “Crank That” as their ringtone for one dollar, generating an additional million dollars of revenue for Soulja.

If you’re ever tired of clicking “skip ad” on your artists favorite YouTube videos, you also have Soulja Boy to thank for this. Soulja partnered with YouTube after proving he could sustain a credible audience and contracted an ad monetization deal that further diversified his sources of income. While Soulja didn’t invent ad monetization on YouTube, he proved that through advertisements and user downloads alone, he could make a fortune comparable to those of the industry plants at the time. And yet, Soulja was doing all of this from the comfort of his bedroom, without any label to guide or fund his efforts.

Today, Soulja Boy’s model for success is so popular and accessible that it seems like every other trendy teen’s career path involves uploading songs recorded in their bedrooms to SoundCloud and making it big. But it’s important to note that Lil Yachty, Chief Keef, Lil B, Tay-K and many more recognizable rappers blew up with this same model.

Considering that all of these rappers saw success following the multi-step Soulja Boy plan, it’s no wonder that all of the aforementioned rappers have gone on record to claim that Soulja Boy is their favorite artist.

It’s easy to laugh at the idea of Soulja Boy being a major influencer in today’s music industry; he barely took himself seriously. Surely, there will always be the Ice-T’s of the world, who infamously claimed that “this [rapper] single handedly killed hip-hop.”

If Soulja Boy “killed Hip Hop,” it’s archaic methods of operation were overdue for a rebirth.

The New Wave is Moving Hip-Hop Forward, Take a Seat