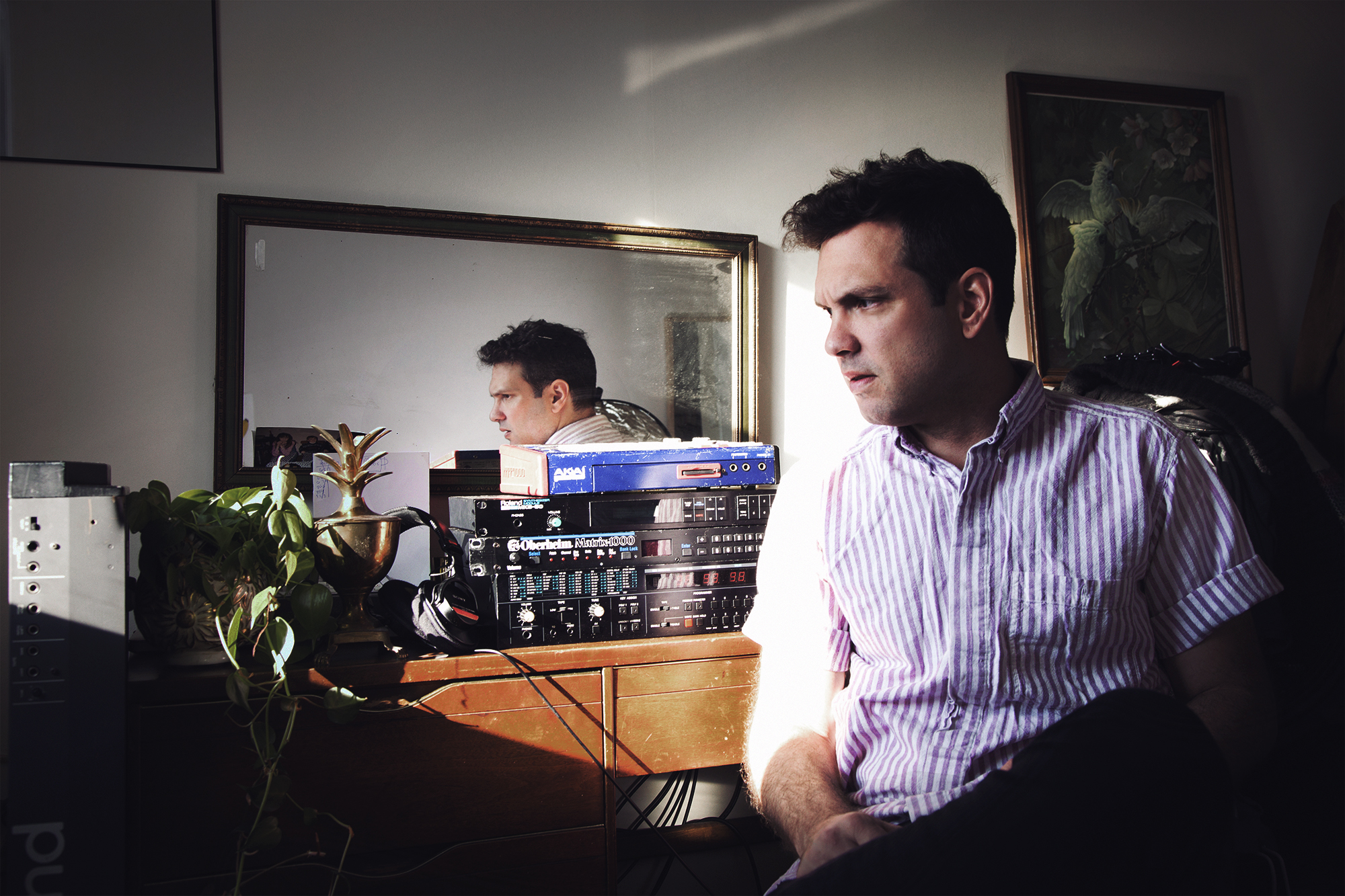 Naturally, we were excited to speak with Stewart about his process. Steward had just played a show in Oakland, Calif., in the midst of tour that will take him through May, 2017.

The following is an edited transcript of that interview:

What is your earliest memory of hearing music that pulled you?

I guess it was when I would ask my dad to play me Beethoven when I was going to sleep when I was five. His friend made him tapes, like Beethoven tapes, that had all of his symphonies, like the first through ninth.

I would go to bed at like 6 p.m. or whatever, and he’d be like, “Which one do you want to hear?” I’d be like, “The 5th,” so that’s my earliest memory of knowing specific music and knowing what I liked and what I didn’t like and being able to make requests.

That was my first request.

When and why did you begin to make it seriously?

I can’t even say when I started to take it seriously, because I try not to take it too seriously or I’ll probably get really burnt out on it, or I’d just get too stressed out. So I try not to think about it – and I try to keep making it.

Hopefully I can continue to play shows and release records and have enough money to buy food and stuff. And if that stops being the case then I’ll stop doing it, but it kind of came out of me just looking for sort of a hobby because I had some free time. All of my friends were in bands and stuff so I was like, “Well if they can do this (then I can).”

So I don’t know, buying cheap synthesizers was a good way to get into making music if you don’t really have any classical training. You can’t really play out of tune because you’re just hitting a key. You can’t really screw it up. So that’s why I chose the path that I chose.

People encouraged me, because I’d play my shitty mix tapes of my music and, thank god, because I know it probably wasn’t very good but they were like, “Awh man. This is great.” So I just kind of kept going with it.

What would you describe the tone of this latest album to be? It could be a scene, color, any descriptor.

I guess it’s sort of like a guy walking down a dusty road with like a gas station in the background.

Like a Guess Jeans commercial from 1986 in black and white.

Can you talk a little bit more about that?

It seems to me like those are the two things that you’re kind of fighting against as you go through life, at least for me. When I was young I was just kind of annoyed that I had to be where I had to be. You’re not in charge.

Then, as you get older, you start to think about the other choices you could have made that would have put you in a different place, and if you made the right decisions. As you get older, your freedom becomes more limited in the same way it was when you were young because you have responsibilities.

I guess. Young or old.

People have said your music fits in the genres of darkwave and synthpop. What are your thoughts on genres and titles?

Well, I mean that’s interesting. It’s complicated, you know? There is a commercial aspect of it because if you work in the music industry and you work for a publication, you want people to read your articles. You might know more specific ways to describe music that people that you spend time with outside of work can relate to, but you might feel like the best way to describe something is to make it accessible to a wide audience.

You need people to read your articles and click on your banner ads or whatever else. You might describe it in a way that is a little imprecise, or maybe like a little inelegant and so it’s weird.

On the one hand, I definitely am not trying to do something that’s clearly defined by some sort of genre. But, I also know that people have to sell stuff. What I don’t like is when I’m trying to describe what I’m doing and people that work with me want to tell me how I should describe it, because that’s really my chance to talk about it the way I want to talk about it.

So whether it’s in the bio on the Ghostly site or in interviews or something like that, not that someone interviewing me would tell me to change how I’m talking about my music, but in an area where I should have the platform, I’m not thrilled if someone is like, “You should describe it a little more like this. It would get more whatever.”

I do understand if somebody that works at Fader of Pitchfork or wherever is trying to get as many people as possible to relate to this, so they describe it in some way that is maybe a little clunky. But I also think smaller publications, that maybe don’t have the same breadth of readership aren’t under the same pressure to make money. I think it’s sort of their job to do a little better job of explaining, y’know? What something sounds like or where it comes from. 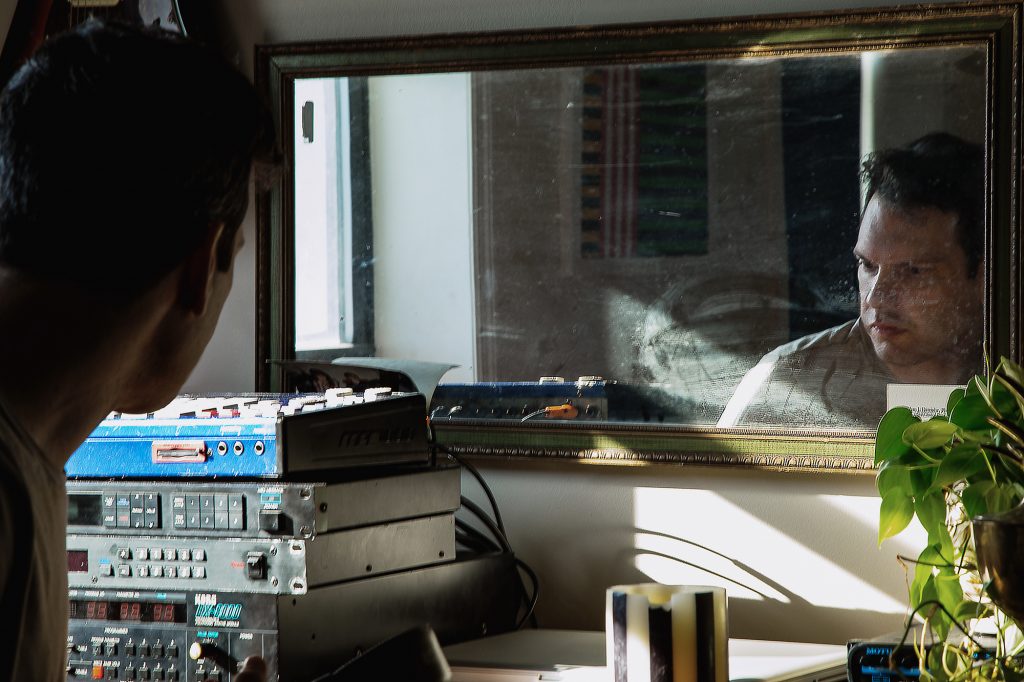 Do you have a unique genre you think you fit or unique name or title for your sound?

No. When I’m writing stuff – I just try to make stuff.

So this is like a nuts and bolts example. I can try to set a certain pattern or a certain sequence or notes or chords to run in a sequencer. Those notes will be playing and I’ll have a synthesizer and I’ll run through the preset. When I actually first started making stuff, I wanted to have a lot of control, so I read all of these books on synthesis. I got good at making a synthesizer sound how ever I wanted it to sound, but I found when I did that I would really waste a lot of time trying to be perfect.

Weirdly, and kind of counter intuitively, as I get better at writing stuff, I just want to hit the preset package. I want to hear it almost like a listener and just make a decision as to whether or not I like it. It’s hard for me to explain.

I use these instruments. I know they have a certain connotation to how they sound. I’m trying to set things up so that I can make decisions on how something is arranged and the tones that are used and be like, “Oh that’s something,” but I’ve never heard that thing before and it should have existed. I feel like it did, but I know that it didn’t. And when I hear that voice saying that, then I know that I should keep it.

If there’s a name for that, I don’t know what that would be.

Do you have any other artistic outlets besides music? Do you write in your spare time? Make art?

Yeah, I used to write quite a bit, not so much any more. I’m a commercial art director, like a designer. I don’t do that right now, but I do that by trade. That’s how I made money before. While I was making music I kind of stopped doing it in order to try to concentrate on touring and writing a little more. But it’s cool.

Back in the day you would become an architect and you would get up every day with your lunch pail and go to your job, and you would just get better at that. Now people are successful by kind of synergizing three or four different things to make like two things that are kind of better than the sum of the parts.

So it’s not on purpose, but I think part of the reason why this project is able to sustain itself is because I did have kind of a background in writing. That’s good for lyrics. And I have a background in commercial art so that’s good for making album artwork. And then I started getting really involved in music. So those kind of three things, having all of those skills together, meant I can be a one stop shop for this band.

It’s so hard to make music these days and live off of it, but because I can kind of do everything myself, I can sort of make it work.

Are you the eBay buyer or the eBay seller?

Do you actually own a black marble?

Yes I do. I bought it for $1000. It sits in a little cup and it floats. I got it at the Sharper Image. You should check it out. It’s a great place.

Cynthia Davis is a KCPR DJ and Cal Poly earth science junior. She conducted this interview; Davis’ show is Wednesdays from 6 p.m. to 8 p.m. KCPR is accessible via KCPR San Luis Obispo 91.3 FM and KCPR.org. The photographs are courtesy of Black Marble.