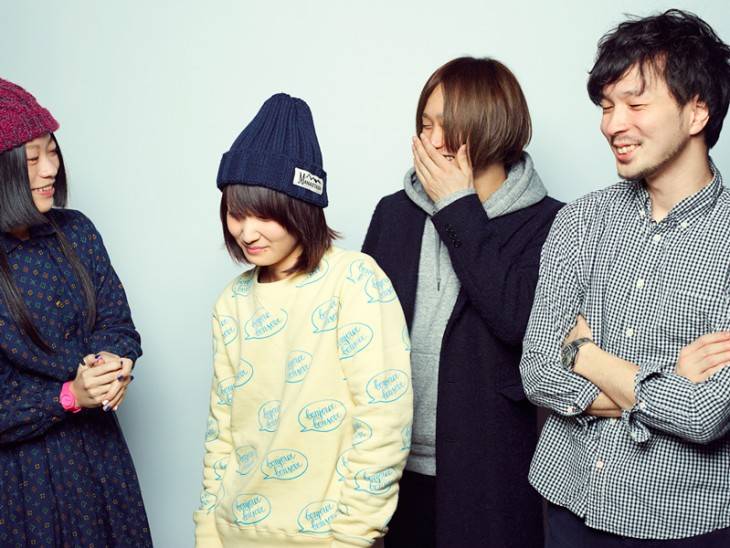 The distorted guitars wash over you like waves; you are enveloped by the resonance and feel like you are dreaming. The vocals are opaque—but evoke something strong in you regardless.

This is the essence of shoegaze.

Shoegaze is a genre that was so named by music writers for the performative quirk that emerges from the nature of the music—that the performers spend much of the show looking at their feet managing their pedal board. The movement was particularly popular in the late ’80s through the ’90s in the United Kingdom and the United States. My Bloody Valentine’s Loveless, a major album in the genre, was hugely successful in Japan, which helped to spawn its rich shoegaze scene. One could endlessly speculate about why this is the case; my personal interpretation suggests a cultural link to ukiyo-e (“pictures of the floating world”), an Edo period woodblock print style portraying the ethereal and ephemeral pleasures.

Much of the importance in shoegaze and related genres is placed on how the vocals sound rather than what the lyrics say (this is not to say that the lyrics are unimportant, but rather that the same feeling can be evoked without an acute understanding of what they say—a wonderful aspect of these genres). Because of this, shoegaze and similar dreamy genres are conducive to being appreciated despite language barriers.

There is significant debate about what makes music shoegaze rather than dream pop, or a different genre entirely. To circumvent this, treat this list more as a primer for Japanese music that evokes the aforementioned feelings, instead of a rigorous guide to Japanese shoegaze. Here is a list with a mix of some of my favorite Japanese artists that make ethereal music along with those that many would consider ‘essentials.’

I would like to preface these recommendations with an admission that any musical analysis I offer is both from a Western perspective and speculative, extrapolating from the sounds. Obviously, lyrics would provide me a greater understanding of this music, especially so for the albums that are focused on a narrative. If any of my readers speak Japanese and take issue with my analysis, please let me know in the comments or send me an email so I can either amend the article or even write a ‘response’ to this one. That all being said, even though I am not an authority on the Japanese language or culture, I think this article demonstrates the power of this type of music. The fact that I could construct intelligible, coherent analysis without knowing the language speaks to the evocative nature of the genre, something that I think spans across different cultural understandings.

It would be remiss of me not to mention Kinoko Teikoku (きのこ帝国) are both a personal favorite and somewhat of an essential. They were my introduction to Japanese music (after Asobi Seksu, a wonderful American duo with many songs written in Japanese by their main vocalist Yuki Chikudate; listen to Citrus). Kinoko Teikoku fall into the category of ‘maybe not actually shoegaze,’ especially as you progress through to some of their recent albums, which are considered either pop-punk or J-pop. They are a frequent gateway band into the Japanese ‘shoegaze’ scene.

Their debut, Uzu ni Naru (渦になる) is my favorite from their discography. Uzu ni Naru is less shoegazey than their second album, eureka, which even features a cheeky allusion to My Bloody Valentine’s “Only Shallow,” the opener of Loveless. This ‘mini album’ is anything but. The title track, “WHIRLPOOL” (an English translation of Uzu ni Naru), sets the stage for the listener’s journey. Repetition throughout the latter half of the song positions the listener in a whirlpool, moving around and around in a circle with no way out. The album proceeds in a descent through the whirlpool, featuring many stylistic turnarounds throughout.

Supercar (スーパーカー) are one of the earlier bands on the scene. Their 1998 debut album Three Out Charge, is nearly 80 minutes long. The oeuvre of Supercar, like Kinoko Teikoku, is stylistically varied. While most of Kinoko Teikoku’s dreamy nature is preserved throughout their discography, within one Supercar album there are juxtapositions of completely lucid, simplistic J-pop with incredibly obscure, utterly incomprehensible noise rock. Their earliest albums feature the bulk of their shoegazey songs; their later works are more heavily electronic. I think they merit inclusion for three reasons: several of their songs prominently feature the central aspects of shoegaze, they were early on the scene, and partly because the spontaneity is dreamy in its own right.

I feel like it shouldn’t be controversial to call Tokyo Shoegazer (東京酒吐座) a shoegaze band, but of course it is. They’re a supergroup that was spontaneously formed for the sake of a birthday party performance. The members filter in from the hugely popular rock band Plastic Tree, the popular shoegaze band 101A, and a few bands with small followings outside of Japan (I can’t speak to their popularity within Japan). Their first and most popular album’s art has a cat surrounded by guitar pedals—which I think is pretty shoegaze. Both of the full length albums they released during their short tenure are enveloping walls of sound that show the significance of their post-rock origins.

Pastel Blue are a mysterious, short lived band with a few fantastic EPs. Very little information on them is available, except that they were from Osaka, active for three years, and have since moved on to new projects. Many people have said that they sound like a Japanese Slowdive, which ought to be seen as considerable praise (albeit Eurocentric). Luckily, if you would like to get cozy with some comforting Japanese dream pop, they actually have their work on BandCamp (with a bio that reads “the tomb of us.”) Both Blue Demos and Pastel Demos are fantastic. (I prefer Blue Demos.)

My Dead Girlfriend (死んだ僕の彼女) and Shojoskip (少女スキップ) are both great bands in their own right; I mention them together because of their split album Sweet Days and Her Last Kiss. The split on this album helps the overarching narrative come to fruition; My Dead Girlfriend takes the “Sweet Days” and Shojoskip takes on “Her Last Kiss.” The first half is mostly upbeat and inviting, with certain points of tension and uneasiness demonstrated by rhythmic shifts. The second half is nostalgic and distressed, fully aware of the relationship’s downfall.

Cruyff in the Bedroom are a very confusing band, biographically and musically. First, they have an album almost entirely in English called Perfect Silence. This would not be strange were it not for the fact that there is nearly nothing written about them anywhere in English. (I suppose this probably isn’t much different than the plethora of vaporwave artists using Japanese for album and song titles, with little to no Japanese biographical information.)

Furthermore, in the several articles I was able to find and translate, somewhat coherently, they are constantly referred to as the “proclaimed Kings of Japanese Shoegaze,” with the bio on their website featuring the quote “Japanese King of Shoegazer” (in English, which only furthers my confusion).

Finally, I don’t mean to cite a YouTube comment with any sort of authority, but ‘takumi nakamura’ says, “They are not a king . Not famous in Japan . I want to inform the truth to you guys . [sic]”

I particularly like their 2001 EP, Shoegazer of Happy Valley, which features songs with both English and Japanese lyrics.

Coaltar of the Deepers are another group, like Supercar, that heavily experiment with a multitude of genres within each album. They are so varied in their albums that I have them tabbed to my music player because I was unsure whether I was listening to the same album. I think the band’s swan album, Yukari Telepath, is their masterpiece (and a wild ride), but it is more apparently influenced by metal than shoegaze. No Thank You is definitely less terrifying, and much lighter. It features a more consistent and prevalent shoegaze influence throughout the tracks than Yukari Telepath.

Plastic Girl in Closet are the cutest shoegaze group around. This is mostly due to the vocals, which feature a heavy J-pop influence. The cute, dreamy, disarming vocals are paired with bells and tambourines, which make the distorted guitars feel more like a duvet than a wall. This original approach creates a comforting and intimate listening experience. Cocoro is my personal favorite from their discography. The word ‘cocoro,’ frequently transcribed in romaji as ‘kokoro’, means ‘heart’ but in a ‘mind,’ ‘feeling,’ and ‘spirit’ sense rather than a body part sense. The art also features a nice dreamy pastel background, a pastel apple, and some animals with rabbits kissing in the center; Plastic Girl in Closet are unapologetically transparent about how they want their music to make you feel.